Guide to solving Cryptic Crosswords from the creators of The Da Vinci Game, a thrilling board game using ingenious codes, riddles and logic problems. Will you be the Grand Master?

This page has tips on solving cryptic crossword puzzles. The Da Vinci Board Game, featured on the rest of this website includes 800 riddles, anagrams and logic teasers and fans of cryptic crossword games will enjoy playing the board game, which was designed by a crossword compiler and has many elements in common with cryptic crosswords.

Cryptic crosswords are a peculiarly British form of entertainment; established  in the early 19th century, they represent a way of thinking that has been described as warped or twisted, (mostly by those who have not learnt the method), and as indicating a fiendish ingeniousness and intellectual superiority (mostly by those who have!) Cryptic crosswords contain the elements of lateral thinking that enabled the breaking of codes in wartime Britain, and require a working knowledge of such varied subjects as ancient Greek and Roman mythology, science, literature, mathematics, geography, politics, history, and very obscure words. Don’t however, be discouraged by this if you are just starting on the slippery slope of addiction. It's possible to start with very little knowledge and gather the smattering that you may need as you progress. A lively mind is a greater asset.

Get a good dictionary- Chambers is the standard crossword dictionary, but it's useful to have more than one. A Thesaurus is helpful, and a copy of Brewers Phrase and Fable is invaluable. A crossword dictionary would be a good back up. You can get similar reference works on line now but they are not always as good, especially when you don't have a specific goal in mind.

Typically a cryptic clue consists of two parts, a definition part, just as in a quick or straightforward crossword, and a subsidiary part, which can take many forms.
The clue is read as a sentence or phrase which makes some sort of perverted sense; this is called the surface reading. A compiler will try and put together a sentence in which the words could be related but in fact are not- or possibly not!

The answer is hard hearted, the definition is 'dearth of compassion', but dearth is also part of the anagram.

The first skill to learn when solving a cryptic crossword is to analyse the clue to find out where the definition is hiding.  The definition part is usually the most straightforward part of the clue (but not always). As an example, look at these clues:

One louse might address their offspring like this, allegedly? (4)
Answer UNIT- the definition for this is 'one'.

The secondary or subsidiary part of a clue is also known as the wordplay. In this part there is another indication to the answer,  it could be a second definition, an accumulation of clues to making up the word from its components, or an indication to the sound of the word- there are no hard and fast rules for this part, and you are more highly rated as a compiler if you can invent new methods of hiding the solution. The only criterion used to judge this, is the nebulous concept of 'fairness'- if having arrived at the answer the word play is now seen to contain all the elements that were needed, and it was only lack of reasoning power which meant that it took 3 days to solve, then the compiler has succeeded. There is a word, or combination of words, which will indicate the type of subsidiary, for example, 'sounds like', for a homophone, 'contained in' for an embedded clue, etc.

Use of abbreviations and deletions, foreign words and archaic words

Many clues will contain abbreviations, such as L for left or large, K or M for a thousand, ST for saint or street. These are the commonest, but anything that has ever been used as an abbreviation is fair game. 'The French' can clue LE, LA, or LES, 'the Spanish' EL, 'German, yes?' can clue JA. 'You old' or 'old solver' can clue thee or thou. A deletion can be a letter or group of letters removed from the words to leave the soluion.

Kingdom left in pile of paper (5)
Answer REALM- where 'ream' is a pile of paper, with 'L' for left contained inside.

Titivate pretentious men without heart (5)
Answer PREEN, where 'without heart' is the indicator for removing the central letters of PRE-tentious m-EN

In these clues the letters of the solution are mixed up to make other words, which are then fitted into the sentence. It is usually considered sporting to give an indication that there is an anagram- in the following examples the indicator words are 'mixed', 'circulate', 'composed' and 'arrangement', but often it can be as simple as 'off' or 'out'.

To me, Rilke composed a measure of some length (9)
Answer KILOMETRE

Arrangement I can't miss, go with belief in the material world (11)
Answer AGNOSTICISM

These use pronunciation to give a subtle clue to the solution- it can be whimsical. Indicator words in these examples are 'verbally' and broadcast.
Call to account for a royal era, verbally (7)
Answer ARRAIGN ( play on the sound of 'a reign')

In this type of clue the solution is given with the letters in the correct order but contained within other words. Indicator words are 'in the middle','characters in', 'even...contain', 'holds back'

a) straightforward embedded
Wife's python has a look in the middle! (4)
Answer ESPY

d) starter letters
To start with, every growing youth, possibly, thinks of a distant country (5)
Answer EGYPT, from the first letters.

b)contained words
Pager holds head back sitting on the bus? (9)
Answer PASSENGER, in this case 'pager' is straightforward, and 'ness' is head, inserted backwards inside.

c) mixture of techniques
Shiver endlessly, shake, and get a rash (5)
Answer HIVES, the indicator words are 'endlessly' (deletion)and 'shake'(anagram)

Takes a taxi back to America for a calculator (6)
Answer ABACUS- this uses a reversal and an abbreviation to make up the word.

Repaired after newcomer was proposed (11)
Answer RECOMMENDED, an anagram of 'comer' (indicator word is 'new') followed by 'mended'.

Many clues make use of puns and double meanings in the same way as a joke, and often make you laugh when you get the answer.

Start like a spare pair of false teeth (6)
Answer OUTSET

Evils that won't find you at home, reportedly (4)
Answer SINS - as in 'your sins will find you out'

These are just some of the ways in which solutions are clued-trying to encompass the vast range of word play in cryptic crosswords is a Herculean task- within the understood rules, 'anything goes'!

Where to go next

After having used this article as a springboard, the putative solver should then take the plunge into the deep end of cryptic crosswords. The examples given here are all taken from the authors' crosswords for The Big Issue in the North, which are at medium level- a good point to start at. Try to solve the cryptic clues, and the following week check against the answers for any missed. With the answers available it should be possible to work out the construction of the clue, which will then help with solving the next, and so on.

To progress from this point, more difficult cryptic crossword games and puzzles are found in the broadsheet newspapers. The Guardian has a big group of compilers, each with a pseudonym, of whom the best known and loved is Auracaria, the pseudonym for John Graham, who  celebrated his 90th birthday in 2011. His crosswords are the fairest, the most ingenious, and the most erudite of any compiler, with a marked sense of humour.

Once the standard broadsheets crosswords have become solvable, there are a limited number of  extremely difficult crosswords, such as the once a month Genius crossword in the Guardian, usually a themed acrostic; or the Sunday Times supplement Azed crossword. There is a subscription crossword paper called One Across, which includes 2 crosswords by Araucaria.

By this time you will be 'hooked' and unable to start the day without trying to metagrabolise a labyrinthine, mind-boggling, flummoxing, bamboozling brain teaser! (and your vocabulary should have improved as well!)

This article was written by Annie Bowyer, a part of the dual identity that is the compiler Panthes, whose crosswords appear in the Big Issue in the North every week. This cryptic crossword compiler also composes under the names Panthese, Pantheon, Pangloss and Pantechnicon. 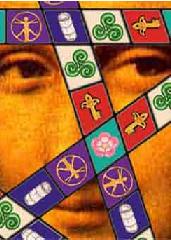